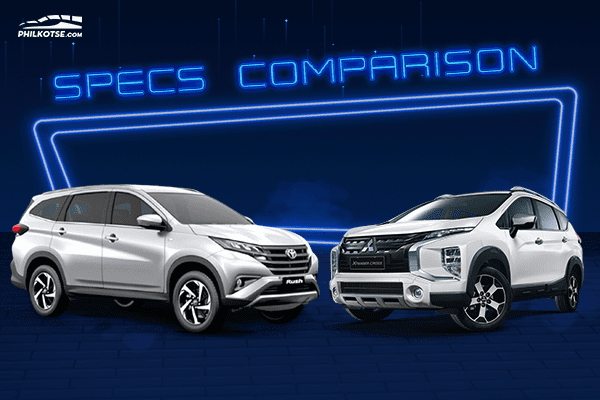 High seating capacity MPVs have always been the first choice of Filipinos. Many car companies tried to produce SUV-style MPVs to attract more customers, and Toyota Rush was released one year ago. After a short time, Mitsubishi introduced the Xpander Cross.

Both MPVs have a fascinating outlook and high riding. There was no doubt that they could fascinate customers who have an interest in cars at first sight. But the question is, which one is better, Xpander Cross or Toyota Rush?

Let’s have a look at Xpander Cross vs Toyota Rush Philippines in terms of specs!

There are similarities in exterior in both MPVs. The 17 inches wheels, fog lamps in front of the car, roof rails with shark antennas, daytime running, and headlamps LEDs are equipped to them.

It can be seen that the inside space of both Toyota Rush and Xpander Cross is extremely comfortable. It’s true. Both MPVs can contain up to 8 persons, and we can tumble the seats down to have more spare space for cargo.

Another impressive point about the seats is that seats of Xpander Cross have a flatter surface when folding than the Toyota Rush’s one.

Moreover, the entertainment system of both MPVs has similarities. The 7-inch size eight-piece speakers can be connected with automobile devices, AUX IN, and USB for your driving music playlists. However, the Xpander’s one is a little bit more modern than Rush, thanks to the offline navigation handling feature.

As for the air-conditioning system, the Xpander Cross has a manual AC, while the Toyota Rush owns an automatic AC system. In addition, both of them have rear vents.

The steering system, which allows drivers to control by voice, is an impressive point of those MPVs because it supplies amenities for drivers. However, the MPV made by Mitsubishi allows people to control the cruise while Toyota’s one has no feature of that.

Finally, it is fortunate for us since both of these vehicles have keyless entry systems, and we can start them with only a push on the start button.

According to the given information from Mitsubishi, the engineers decided to equip a 1.5-liter inline 4-gasoline engine and an automatic four-speed transmission for Xpander Cross. This engine helps Xpander to make 141 Newton meters of torque and 103 horsepower.

Surprisingly, Rush has the same engine system as Xpander Cross. However, its engine produces 134 Newton meters of torque and 102 horsepower, which are considered slightly less powerful than the Xpander’s one.

Although there is no considerable amount of differences in power between two MPVs, there is entirely disparition in their drivetrains. The front wheels are provided for the Xpander Cross; in contrast, the Rush transmits power to the rear wheels.

Lastly, the Xpander Cross uses the chassis unibody, and the Toyota Rush uses a ladder chassis.

The table below shows the comparison summary of specs of Xpander Cross and Toyota Rush.

The Toyota Rush has the same safety design as the Xpander. However, their airbags are different. The Rush has front-side airbags, while the Xpander owns the usual dual front airbags.

There is a fact that most car consumers generally put the car’s outlook at a high position in their considerations list. Subjectively, the look of the car depended on the individual’s sight, but we can not deny that the outlook of Xpander is more attractive.

Interior is another point that should be considered when you make a choice between two MPVs. As we have said earlier, seats of Xpander Cross are more planar than the Rush’s one when they are folded so that it can provide you more space for optimization.

But there are reasons for the popularity of Toyota Rush. In fact, there are some persons who prefer the RWD cars to the FWD cars, in addition, Rush also has a ladder chassis which is stronger than the Xpander’s unibody chassis.

The price is also a considerable factor. It can be seen that the Toyota Rush is more affordable, and we can see the reasons for this difference just by looking at their interiors.

Well, if you are a person who concerns more about the fancy outlook with convenient and large inside space, you should choose an Xpander Cross. On the other hand, the Toyota Rush might suit your needs better if you are the one who wants to have an RWD with a ladder frame and a less ornate interior. We hope you have figured out the car fits your more between Xpander Cross vs Toyota Rush Philippines.